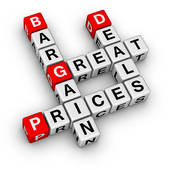 Since the time I was old enough to purchase my own clothes, I've always been on a hunt for a good deal.  I absolutely REFUSE to pay full price for anything clothing related. Jon actually get's really super frustrated with me because anytime he takes me to go shopping I immediately head for the Clearance racks first.  He can't understand why I would head there first, especially if I'm there to spend a gift card (which is pretty much the ONLY time I ever buy anything for myself.) Here's how I respond to his frustration:  I would much rather find two or three things I like from a Clearance rack, then find one thing I like that's not on Clearance. Right?!

Right after I graduated high school (actually on the day I graduated) I started working in retail.  I worked for Mervyn's (man, how I miss that store!) for almost three years and learned to watch the Clearance racks.  They would have these AMAZING sales once a month when they would take an additional 25% off the price on the tag.  Couple that with my AMAZING 15% employee discount and I was able to get pretty cool stuff for dirt cheap! However, I wasn't making much (only $6.25/hour), and my paychecks really just went right back into the store. But, I did learn to pay attention to when certain stores do their markdowns (that's when you get the best stuff because it's not all picked over!) THIS blog was amazingly helpful in finding out when to hunt for bargains at Target. And who doesn't love Target?!

Over the years I've also gotten really good at couponing. Now, I'm not an extreme couponer by any stretch of the imagination. In fact, I don't even typically use it for my groceries. BUT, whenever I know we need to buy something, I always check my resources before we leave the house.

My first resource is my phone. I have this super cool App on my Droid cleverly called The Coupons App that allows me to search by product name or by store.  You can also put in certain stores you love to shop at and get alerts anytime a new coupon is available for them! For instance, if I was needed to go buy my kids a coat I could do a search for the brand I wanted ("Columbia") or I could search by a store I know I could find a good coat at ("Old Navy"). Then it will pull up anything that matches.  Old Navy and Kohls are my favorite to search because they almost always have a coupon out, and it's almost always for at least 15% off the total price. If I can't find anything on the app then I hit up google and search for "Old Navy Coupon Codes" or something of the matter.  You have to be really careful if you google because there are a ton of sites that will give you viruses, and a ton of sites that want you to pay them to give you the codes (most of which are invalid). Just a heads up. I've used these strategies to score some pretty awesome deals. Most recently we were able to score a free pair of shoes for Tanner while we were back to school shopping.  We had a coupon for $10 off the total purchase (of $25 or more)from Payless and found a cute pair of shoes for Zoey that were on sale for $17.99. We also found a pair of shoes for Tanner on Clearance for only $8.00. Combined their shoes would have cost us $26 plus tax. But with the awesome coupon we only spent $16, which meant that Tanner's shoes were technically free! (Might I also add that it's a good thing these shoes were "free" because my dog ended up eating them two days later. If I would have paid for them, he would be a dead puppy right now!) We also have used it in the past to get free popcorn and drinks at the movies!

Another way that I snag some pretty sweet deals is by participating in some local trading/bartering/selling groups on Facebook. These can get WILDLY out of hand (and some times pretty obnoxious) but for the most part, if you use your common sense, can be a great way to buy and sell some gently used items.  For instance, prior to my yard sale I was cleaning out Zoey's closet and found three very pretty dresses that were just too small for her now.  She only wore them on Sundays and they were in great condition. If I would have put them out at my yard sale, someone would have chewed me down to .25 a piece...but I posted them on one of my FB groups and made $5.00 a piece off of them. Pretty sweet deal. The thing about these groups is that in order to get anything good, you pretty much have to sit around and scroll through the posts all day. I can't stand that! But I have managed to get a cute pair of jeans for Tanner for only $2.

The last way I snag some pretty sweet deals is by using this awesome website. I'm still pretty new to the scene here but it's an awesome opportunity.  I love to go into Once Upon A Child and look around. Sometimes, I get pretty annoyed that they put some stuff that should be at the Goodwill on their shelves and then try to get me to pay them $7.00 for a pair of $2.00 jeans. My friend recently sent me this website that works a lot like Once Upon a Child but has really great prices on their clothing.  The clothing is all gently used, mostly name brand clothing, at the prices you would see at the Goodwill. The best part? If you spend over $30 they'll ship to you for free! AND if you refer your friends, they give you a $10 credit on your account!  If you wanna check it out, HERE is a link!