Thursday morning I woke up and drove down to the post office to snag a local paper with all the Black Friday ads in it. When I got back home I had this crazy little intuition that I should just leave the car in the driveway rather than pulling into the garage like I normally do.  Jon thinks I was in on this little prank, but I insist I was not! My thinking was that we were going to be headed to my parent's house in just a few hours and would probably be loading lots and lots of stuff in the car and it would be easier to do so if the car was in the driveway rather than the garage. ANYWAY, I left the car in the driveway. A few hours later we gathered our loads and loads of stuff and went to pack up the car. Zoey was the first one out the door and screamed "Daddy! Someone wrote on your car!!" We all came out to the driveway and found THIS: 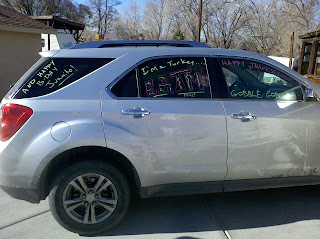 Yes, that does say "I'm a Turkey....EAT ME....please?" We knew right away who did it. There's only two people in the world that call Jon "Juanito", and they just so happen to live a few blocks north of our house.  This guy and this gal! We love them so much! They sure put a smile on Jon's face!!

Every year Jon asks for a coconut cake, and every year I end up going to the Safeway bakery and buying one. This year, I decided I was going to make the BEST COCONUT CAKE EVER! I found THIS little gem of a recipe on Pinterest and decided to try it out. Okay. I know I've said this a million times but I don't cook. I can bake some things (yes, there is a difference) but for someone who can burn anything I touch, this cake was quite the feat. I mean, I only had one 9 inch round cake pan, so I had to cook them at separate times and I managed to get them out of the oven in the PERFECT amount of time. AND the coconut. Have you ever tried to toast coconut?! It goes from not even dry to burnt to a crisp in like 10 seconds. There's definitely an art to it. So I made this AMAZING birthday cake for Jon. He was really impressed!

So the bummer about Jon's birthday falling on Thanksgiving is that often, nobody really treats it like a special day for him.  Everyone would rather eat the pie than eat the cake.... and that's pretty much what happened this year too.  We had Thanksgiving dinner at my Mom and Dad's and everyone wanted the pie. Zoey and Jon were the only ones who took a piece of cake.  I figured, no big deal, I'll have some at home tonight when my turkey induced coma wears off. But the universe had other plans.

Let me just say, us Stanley's have a bad case of Murphy's Law syndrome (I just made up the syndrome part of that, deal with it). If something CAN go wrong on a holiday, it WILL! As we were packing up our stuff and leaving my parent's house, Jon came around the corner to where I was herding chickens gathering our children, with a look of absolute horror. I asked him what was wrong and he said "I just dropped the cake." Jon is like a big kid and often jokes about things that he probably shouldn't. Joking about dropping the epic birthday cake I made him (that took 3 hours to bake from start to finish), it's really not appropriate to joke about. So I asked him "Swear on your love?"- This is our little way of saying, "Okay... joke's over, now tell me the truth." to which Jon responded "I swear on my love." He had been carrying the cake holder by the handle and the lid wasn't snapped on all the way. So gravity won.....

I came around the corner and there was my masterpiece lying in a big heap of coconut, dirt, and strawberries. I felt like the Mom off the Christmas story when the hound dogs stole their Turkey and they had to go to the Chinese restaurant for dinner. All I could do was let out a half laugh-half cry. I'm not sure who was more disappointed, me, Jon, or my dad. He came out to the site of coconut all over his driveway and asked "But you left me a slice on the counter, right???" When we told him that we hadn't he goes "But I didn't even get to taste it!" LOL

Jon felt so terrible. I like to think that he felt most terrible because of all the hard work I put into the cake, but I really think he felt terrible because he didn't get to have seconds. And even though Jon's birthday cake was smashed to bits.... I like to think he had a pretty swell birthday.  He even got to go Black Friday shopping for the first time in 5 years (thank you, Shamrock)!!

I sure am glad to have such an amazing husband! He has been such a blessing in my life for the last 8 years. No one can make me smile, laugh, and give me the butterfly's in my stomach like he does. Happy 29 years, Jon!! I love you!