So lately, my little boy has been CRACKING me up. I thought I would share some of his insights because they certainly brought a smile to my face.

First of all, I've been struggling SO much lately with getting/keeping the house clean when my boys are home. I've tried millions of ways to keep them busy while I clean and even to engage them with the cleaning and NOTHING has worked. Until Saturday! We were going to have some friends over to play some games and the main bathroom (the one the kids use) was pretty funky.  You figure I've got a 5 year old, who refuses to lift the lid or flush when he goes, and a two year old who is potty training and doesn't have much "control". So I enlisted Gavin to help me clean.  Something I learned about Gav is that he doesn't like to pick things up when we're cleaning, but he really likes to wipe things off and scrub things down. So I equipped him with the toilet brush and cleaning supplies and let him go to town on the repulsive toilet. As he lifted the lid of the toilet we had the following discussion:

Gavin- "Wow. This is gross."
Me - "Yup. It sure is."
Gavin - "What is that?"
Me - "That's what pee looks like when it dries on the toilet."
Gavin - "SICK! I really need to start lifting the lid and flushing the toilet because THIS is not right."
Me - Laughing "You are so right!" 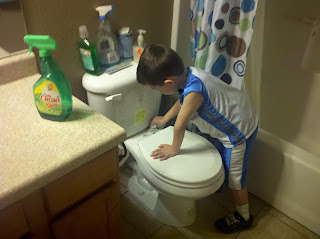 Since this conversation Gavin has flushed every single time and has even started lifting the lid!!! Once it clicks in his head, he is a changed kiddo! So he scrubbed the toilet and wiped down the toilet lid and seat and base. He went to town on that thing! I didn't even have to go back after him and fix it. He did a great job and I'm pretty sure he enjoyed himself. BONUS! If I never have to scrub another toilet I will be SO happy!

A few days later while I was driving him to school we had another EPIC conversation that just amazed me with how smart he is.

Me - "Gavy your birthday is coming up!"
Gavin - "It is?! Like tomorrow?"
Me - "No, next month. Right before Halloween. You're going to be six!"
Gavin - "YEAH! Will my voice change?"
Me- pretty stunned "Uhhh, probably not. Why do you ask?"
Gavin - "Because when I get older my voice changes."
Me - "How do you know that? Who told you that?"
Gavin - "No one told me. I just figured it out. Daddy doesn't have a little kid voice anymore and my voice is different from Tanner's small voice. So will my voice get bigger?"
Me- "Maybe a little but you probably wont notice until you're much older, like 13 or so"
Gavin- "I'm okay with that."
Me - "You are such a smart boy. You amaze me every day!"
Gavin- "Yeahhh"

LOL! I just love him so much! He amazes me with some of the stuff that comes out of his mouth.  I'm shocked with how much he is learning in school too. He started the school year pretty shaky with all his letters and he's coming home reading and recognizing site words.

So the last EPIC conversation that happened this week, wasn't actually a conversation.  It was just something he did that made me laugh so hard and wonder "Where did that come from?!" As I've said in my blogs before Gavin LOVES music.  He can memorize words to all sorts of songs after only hearing them a few times.  BUT sometimes he gets the words a little mixed up. As we were driving home on Saturday afternoon we were listening to a CD I made. The CD frequents our car rides because I hate having to scan radio stations for a decent song to listen to.  Needless to say, Gavin has heard this CD quite a few times. So there we are plugging down the road and the song "We're Not Gonna Take it" by Twisted Sister comes on.  From the back seat I hear Gavin start singing "Mommy likes the bacon". I almost had to pull over I was laughing so hard. I asked him to repeat himself just to make sure I heard him right....and I did. What's funny is that I really DON'T like bacon. I wish I could have gotten it on video. One of these days when he's not being so shy I'll capture his awesome singing in the car.

Not sure where he picked this one from but it made me laugh a lot. He's such a funny/smart/awesome kid and I'm so blessed to be his mommy.