Okay, a little known fact about how things go down in the Stanley household. I'm a terrible cook. I MEAN TERRIBLE! I once tried to make a box of Kraft Macaroni and Cheese and managed to turn it into a gooey paste that you couldn't even swallow because it stuck to everything it touched. It was horrible. I know what you're thinking: "How hard is it to follow a simple recipe?" Seriously, if it can be burned...it will be burned (flesh included). My husband, on the other hand, LOVES to cook and is pretty spectacular at it. He's really creative with cooking and knows how to make a lot of things. Because of this, Jon is typically the one who makes dinner every night.

Lately I've been feeling a little self conscious about my lack of cooking skills. I mean, really. Whenever women find out that I don't really cook I can feel them judging me! They get this smug look on their face like "MUST BE NICE!" Let me assure you, I do more than my fair share around this house. It's not like I sit on my bum watching episodes of Grey's Anatomy/Glee/Army Wives/Ugly Betty/Desperate Housewives/Drop Dead Diva/Bones/The Office/How I Met Your Mother on Netflix all day long while my husband works his butt off. Oh wait... okay maybe SOMETIMES I do that. When my dad found out that I don't really cook much he was appalled! He's pretty old school. He told me that it was my responsibility as the wife and I don't work (I actually have two jobs and take care of my kids/house and manage to volunteer as a Girl Scout Troop Leader). Anyway, I was really starting to feel a little guilty that Jon works all day then comes home and makes dinner. He says that he likes to cook and that it relaxes him, but even I can tell there are days that he just doesn't feel like cooking. So I felt like maybe I could help out a little every once in awhile.

Now, I have a little obsession. It's called Pinterest. I can spend hours on that site pinning ideas for home decorating, or cute outfits I want to magically appear into my closet, or fun ideas for my kids and girl scouts. I think I need a PINtervention. (Just for you Cammie because I know how much you love the corny play on words) But one of my favorite things to pin on Pinterest is recipes! I've actually used quite a few and thought I would share the ones I've used and if I loved or hated them. 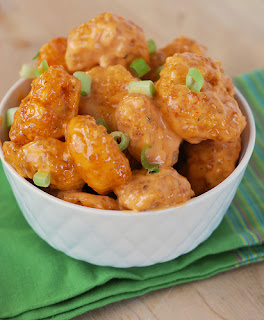 Of all the recipes I've tried from Pinterest, this one is my absolute favorite! Jon and I hosted my family for Christmas last year and instead of having a huge dinner (like we do on Christmas Eve) we had snacks and treats. This FLEW off the table and it's SO easy to make! We actually buy pre-breaded shrimp from Shamrock instead of breading it ourselves. One of the many perks of my husband working for a food provider!

Pepperoni Roll Ups
This one is pretty much fool proof, which makes it a winner in my book! I tend to make these when Jon is out of town (he's not a huge fan). I serve them with little cup of pizza sauce on the side because my kids will eat anything they get to DIP. They're pretty yummy!! 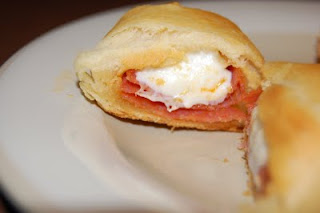 Pizza Casserole
Awhile back my cousin was struggling with some pretty serious medical stuff and had to have some major surgery. I offered to bring him and his family dinner and decided to try this recipe out. I made a double batch and after we dropped it off at their house came home to eat.  I seriously felt AWFUL that I brought it to them. It was not very appetizing. In fact, I would go right out and say it was GROSS! Let's be honest... I like food. There's not a whole lot out there that I wont eat. But you can add this one to that list now!  And I seriously got a mad case of heart burn after eating what little bit I managed to swallow. No disrespect intended, try it if you like... let me know what you think. 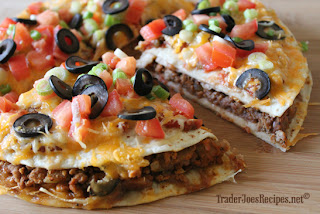 Are you seeing a trend? My family likes "pizza". This really is no big secret but it's something that I added to my menu planning because it's easy and my kids gobble it up! 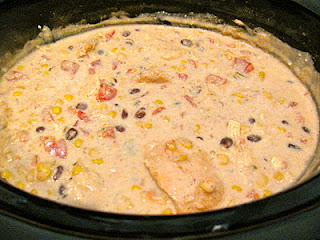 There's not much to screw up with this recipe. You just dump it all in the crock pot and 6 hours later feed it to your family! It suggests to serve it over rice but my family just eats it like a soup or chili. I've made it twice now and my family LOVES it. WARNING: It seriously looks like someone barfed in the bowl, but I promise you it is sooo yummy! On a side note, I made this for my sister and her family after my brother-in-law had surgery. He's kind of a picky eater and doesn't like chunks of tomatoes or black beans. So I switched it up a little and used tomato sauce and chili beans. It came out pretty good! Also, a second warning on this one. DO NOT leave this in the crockpot overnight to "soak". It gets all sorts of stanky and nasty really super fast. Woof. 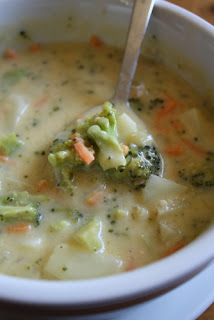 Jon and I LOVE soups. My kids could really take them or leave them, but they ate this one up like crazy!! This is another one that I've made a few times and every single time it tastes sooo good. Pretty easy to make too!

I've done a ton more, but I'm pretty sure not everyone wants to read a fifty page post on food..... I'll make a separate post in the future. Just some ideas to get those creative juices flowing for dinner. And remember.... if I can make these....ANYONE can!