My Best Friend's Wedding - not the story you're thinking of

Jon and I just got back from one of the most amazing weekends ever! It was absolutely perfect!
Let me start from the beginning!! THIS is me and my amazing friend, Cammie. We were dancing in the back of our young womens president's van. I chose to share this picture because I believe it truly captures the essence of our friendship.
My family moved into the area when I turned 9. I can't remember if Cammie's family was already there or if they moved in later but our families knew each other as we grew up. Our friendship became really strong my Junior year of high school when we had choir together.  Over the years Cammie has been the most amazing friend to me.  She is one of the most genuinely kind and selfless people I have ever met.  She NEVER gossips, something which I find extremely admirable because it is just so hard for me! More than anything Cammie has set the most incredible example of how to live the Gospel of Jesus Christ. Cammie served a mission for the Church of Jesus Christ of Latter Day Saints for 18 months of her life in Aruba. She wrote me several letters while she was away, each one filled with more and more encouragement and love. Each one sealed with her testimony of our Savior's love for us. I kept every single letter! 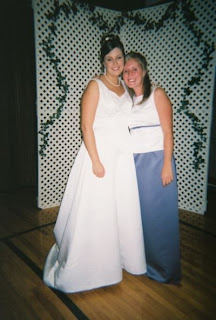 Not only was she an amazing friend to me, she instantly clicked with Jon. Even though she was attending school at BYU, she was right by my side when Jon and I tied the knot. Cammie graduated from BYU and went on to attend Grad school at Auburn University in Alabama. We kept in contact through text messages and facebook and got to see each other occasionally as she would come to visit family. Although Jon and I were raised in the LDS church we hadn't attended church regularly since we began dating in 2004. We still felt like we had a testimony of our Savior but simply lacked the commitment and motivation to make it part of our daily lives. With the examples of some dear friends, Cammie and a few others, and the birth of our youngest son quickly approaching, we knew that our lives were missing something. We felt the hole that could only be filled by the Gospel of Jesus Christ. We began attending church again in 2010 and set a goal to become an eternal family by being sealed in the temple.  We were met with several challenges that year, physically and emotionally and when 2011 rolled around we were ready to finally enter the temple and become an eternal family. Most of my family had been inactive for several years and as Jon and I finished our last temple class I had a hard realization: none of my family would be able to go through the temple with us for our sealing. This was so hard for me to swallow. For those of you who are not LDS, the temple is where we as members of the church go to complete sacred ordinances that are required for us to have eternal life. Eternal marriage, or being sealed in the temple, is one of these ordinances. Because these ordinances are sacred and they are done in a sacred place, members have to meet certain requirements to enter into the temple. So, this was a huge deal for me and Jon and our kids and to not be able to have a single family member go through with us was very sad. A few weeks before our sealing I called Cammie to tell her the news that we had finally had our interviews with our bishop and were ready to through the temple. She happened to be planning a trip to visit family around that same time and was able to be by my side again as we became an eternal family. (My pictures from that weekend ended up not capturing on my camera so you'll have to imagine what we all looked like). Along with Cammie we had some pretty amazing friends join us for our sealing. Some of our ward family from Grand Junction made the trip over, my young women's president that was living in West Jordan,Utah my good friend James that was in Eagle Mountain, Utah and Jon's dear friend Tyler from the same part of Utah came up as well as Jon's Mom who was living in New York. It was so awesome to be surrounded by so many people who loved us when my family was unable to be there. I have been so fortunate to have such amazing friends in my life.

SO.... longest blog EVER?? To tie everything back into my intended post: Cammie is just the most amazing friend anyone could ever ask for. Everyone loves her! Cammie and her boyfriend, Chad, came to visit over this last Christmas. Because of our crazy schedules we were only able to visit for a short time but I enjoyed it SO much! Cammie just glowed around Chad. After just a few  minutes I felt like I had known him for years and that we were already great friends. He was obviously head over heels for miss Cammie, and for good reason too! She's amazing! Not to mention she's absolutely gorgeous! Jon was working out of town and wasn't able to meet Chad but as soon as he came home I talked his ear off about them. I said to him "Cammie's gonna marry that guy! They're perfect for each other!!" So in January of this year Chad asked Cammie to marry him!! We were blessed enough to be able to attend their reception here in Junction and also their actual marriage in the Manti temple on Saturday. It was SO beautiful and I felt the spirit so strong (I had to choke back tears so bad so that I wasn't a blubbering mess when we went up to congratulate them). It was such an amazing weekend and we were so blessed that Cammie and Chad asked us to attend. It meant so much to us!  I did take a camera and I got some super cute shots of this weekend BUT I took my SD card out of the camera and it is MIA. I'm sure it's in the car or tucked in a bag. I'll probably blast them all over facebook when I find them. Don't you worry! ;) 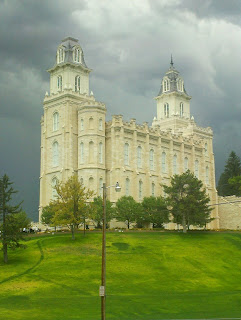 I did manage to grab this awesome picture of the temple as the rain clouds were rolling in. I LOVE this temple. Everything about it is so amazing, including two spiral stair cases that have no center support beam. They span over 70 feet and each stair is supported by the previous one. AMAZING! 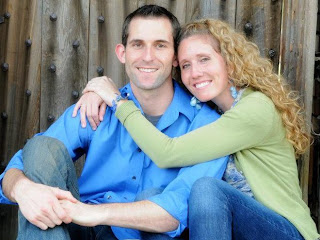