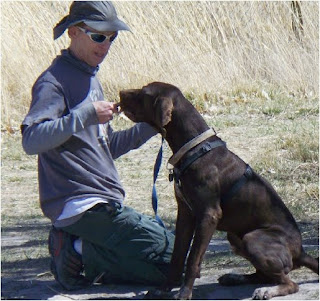 Ever since Jon and I got married we've wanted a good family dog. Our first attempt to make this happen was with a German short hair/chocolate lab mix named...wait for it.... Bruiser. His name was so fitting. This puppy was a total brute. We were both working at the time and didn't have the time to spend with him on training. It was unfair to him. PLUS he was IMPOSSIBLE to keep in our yard. We have a 6 foot privacy fence in the back of our house. I kid you not, this dog would take off running for the fence, jump, bite the top of the fence then fling himself over the gate. No lie...we watched him do it. Plus, our fence has teeth marks on the top to prove it. Bruiser was too much for our family to handle, so reluctantly we took him to the Humane Society. He was eventually adopted and I hope he's a good boy now! This is picture of Bruiser after he was at the Humane Society for a while. Apparently they're much better at getting him to sit. This dog was CONSTANTLY moving when he was at our house... and yes... I tried taking him to training classes at Petsmart. The second day of class he sprung himself from the car and drug me through the entire store where I finally came to rest...on top of a store employee. It was humiliating. The dog was a brute.

Fast forward about a year and Jon starts talking about wanting a good "little" dog. How his sister always had miniature dachshunds and they were the best dogs ever. I started the look out for one but they were pretty pricey. Finally, around Christmas time last year, I found a Craigslist ad for a dog named "Cheeto". I know exactly what you're thinking "Cheeto???" I agree. Totally stupid name for a dog. Anyway, this adorable little doggie needed a new home. The girl told us that she had too many pets and that her husband was making her get rid of a few. Her house smelt like someone had let a skunk lose inside, but we figured that one of her 4 other pets may have been the cause. We bought the dog and immediately changed his name to something more fitting... ODIE.

Odie is... how do I say this.... "Special". LOL he looooooooooves to be touched. Like, constantly. When we first got him he was very aggressive. He growled and snapped at us for a few days after we got him. He has turned into a very protective but very loving dog. He has some very bad habits that make me frustrated and call him names like "dumb dog" and "O-tard". He isn't house broken (despite what the girl who sold him to us had said), he chews on the strangest things... like diapers. This dog has a fascination with digging out messy diapers and eating the contents. See.... he's special. He too has an uncanny ability to escape from the back yard. He is small enough to fit through pretty much ANY hole in the fence. We've fixed our fence the best we can... but this dog can still escape. He's magic.

Despite his "specialness" we still love him like part of our family. Last week we had to go out of town for a funeral. We had planned to take Odie to the boarder but needed to take the boys to a friend first. We unloaded the van, leaving the keys in the ignition while we took the boys inside, doors unlocked. After a few minutes we came back out to find the van....completely locked. Odie was sitting on the driver's seat wagging his tail blinking at us. The stupid dog had stepped on the lock button for the car and locked us out of the van. The thing about our van is that it has a unique key... one that costs almost $150 to make copies of. Because of this we have ONE copy of the key, that was now locked inside our running van along with our dog. We immediately began to panic. We start talking about calling a lock smith, getting a key code for the van, etc. etc. Then my husband says "Maybe we can call Odie back over to the door and get him to step on the unlock button." While our friend called her neighbor(and a friend of ours as well) to see if he still had a wire coat hanger he used to spring someonelse's keys a few days before. We started calling the dog trying to coarse him back to step on the lock.... no luck. He kept getting sooo close, but never stepped in the right spot. I even called the cops to see if they would help us beings the dog was locked inside. The dispatcher responded by saying "we can break your window." Uh... no thanks. After about 5 or 10 minutes of trying I finally said "if this dog manages to unlock this door, I will NEVER call him a bad name again!" I must have said the magic words. His little tiny paw hit the window down button just enough for us to shove a plastic bat in the window and hit the unlock button. I jumped and clapped my hands like a giddy little school girl. My sister later laughed at what my friends and their neighbors must think of me.
I didn't care! I was proud of my little wiener dog! 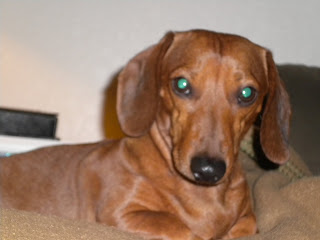 Odie the wonder dog saved the day!!! A few days later he got back on my naughty list by eating Zoey's pillow pet... but that's another story.
Posted by Kim at 4:45 PM