Playing a little catch up

Okay so it's been a really long time since I've blogged.... again. It seems like I always sit down to do it and then something pops up and I don't think about it again for a really long time and then I have too much to type in just a few minutes so I don't.
Lots and lots of stuff happening in the Stanley family household! We took our first official family vacation in June and had such a great time! Jon has been on the advisory council for his work for the last year and June 12th they held an end of year banquet in Heber City, Utah. They put us up in this ADORABLE little condo with a fireplace and kitchen and a cut little package of homemade fudge. I loved it! It rained all weekend so we weren't able to catch a round of golf like we were hoping but we still enjoyed the time to ourselves, even though we were quick to head back to the kids.
On the way back to Junction we stopped in Roosevelt and picked up Jon's son Trevor so that we could take him with us on our trip. Sunday afternoon we loaded up the van and headed off towards Lincoln, Nebraska to see Jon's sister, Kami. This was quite the exciting adventure because I have never been East of Denver. Seriously. I always expected that Colorado stopped on the outskirts of Denver..... it doesn't.... it goes on FOR-EV-ER. Anyway, we stayed overnight in Denver on Sunday then headed the rest of the way into Lincoln on Monday morning. We got in around 3pm and were happy to see Kami, her son Thomas, daughter Jazmine (whom we had not yet met!) and her boyfriend, Milton. Not only did we get to see Jon's sister, but his mom and step dad drove down from New York as well. We hadn't seen them since Gavin was about Tanner's age. It was soooo good to see them all again.
We spent the next few days visitng the children's museum, sprayground, the Omaha Zoo, and Mahoney state park. Not to mention lots and lots of time visiting with family and catching up. I plan to scrapbook the pictures soon and will post them as soon as I manage to find a cute enough page for it.
After our awesome vacation we came home to recuperate for awhile. Jon had to work on the 4th of July (seems like he's missed it the last 3 years or so) but luckily the city of Fruita puts on a show on the 3rd, so we were able to get some time together. I saw these adorable Captain America t-shirts on a blog and insisted on making them for my boys. My sister and I spent ALL DAY LONG on the 3rd making shirts to wear for that night. When I say ALL DAY LONG.... I really mean it. She got to my house at 8am. We went to the store to get supplies then came back to finish them.... 9 hours. Not even exaggerating.... 9 hours to make the stupid shirts. They ended up looking fabulous, but I can easily say I will most likely never do that again. The 4th of July, after Jon had gone to work, I went up with my sister and her hubby and kids to Delta to watch the fireworks they set off around a little lake up there. It was sooo cool, puts the dinky ones they set off in Fruita to shame. I made a scrap booking page with some of the pictures-
1. Do not mock my photoshop abilities.... twas my first attempt and a sad one at that.....
2. I don't really like pictures of fireworks. They never come out as pretty as the actual firework and I get a little disappointed..... 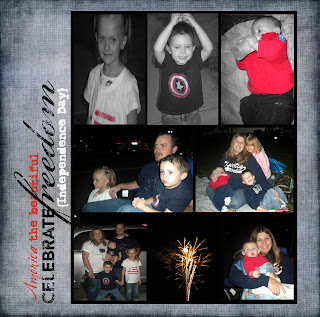 So here's what has been going on with each of us so far this summer:

JON: A lot has been going on with Jon's work lately. A few months ago we played with the idea of Jon switching companies. He was offered a position with a similar company that would pay him just about the same, but he would have a 4 day work week and would be home every Saturday and Sunday. This sounded like a dream to us, but the more we prayed about it, the more we felt like something wasn't right. So Jon decided to stick it out with Sysco. He was able to approach his local manager as well as the director of transportation (his manager's manager) and say that he really needed to resign from the vacation relief position. They were willing to let him do this with no problems! So starting this week Jon is no longer a vacation relief driver, he has a local route and will be home EVERY night. No more traveling (other than for his advisory council and leadership training) I think he's a little nervous to step back from this position, it may feel like they don't need him as bad now, but I really feel like it's a good move for us. The director of transportation also mentioned that as soon as a manager's position opens (wherever it may be) they are most likely going to offer it to Jon. This may mean that we have to leave Grand Junction for the Salt Lake Valley. I don't know how I feel about it.... let's cross that bridge when we get there I suppose.
Zoey: Zoey has been through a lot this summer. She suffered her first big loss on Father's Day this year, her great grandma passed away. She was very close to her and was heartbroken when we told her, but it gave us an opportunity to explain our beliefs to her and that she will see her again someday. Her schedule has changed a little bit and she spends the weekdays with her mom and the weekends with us. With some minor exceptions of course. She's staying busy reading and is really excited to be a first grader!! She started swim lessons tonight and did such a great job listening to her teacher and being brave.
Gavin: This little boy is trying to stay busy and not drive his mom crazy! He loves his sister so much and when she's with her mom he goes nuts. He begs me to go get her every chance he can and when I tell him that she needs to spend time with her mom he sobs "BUT I MISS HER!" It really is one of the saddest things ever. We started a marble jar with both of our kids this past month. For every time they do something great they get to put a marble in their jar. Anytime they do something naughty they get one taken away. Once they get to 10 marbles they get a special treat from the store. This has been working so great with Gav. He is so afraid of losing a marble that he straightens up right away and has been trying really hard to be a good boy to earn those marbles. He also had his first swim lesson tonight, got right in and didn't even cry! He's so brave!
Tanner: Little man is already almost 7 months old. It's going by way too fast. He's eating rice cereal, squash, green beans, peas, carrots, and sweet potatoes. He is such a good eater! Just this week he's started sitting up pretty much on his own. At his last doctor's appointment he weight 17 lbs and is in the 95th percentile for height. He's gonna be a tall boy!!!
I wish I had more to write about me. There's really not much going on in my life. My Grandma is moving back to Grand Junction at the end of the week and I'm really excited to have her back. I'm sure she'll help me fill up my time with a few more exciting details.
As a family we are getting super close to being sealed for time and all eternity. We met with the bishop on Sunday and have set a tentative date for September 24th (maybe 25th) of this year!!! That will be our 5 year anniversary. We are so excited and can't wait to be able to post more details. We love you all and hope you're all well!
-The Stanleys
Posted by Kim at 9:11 PM