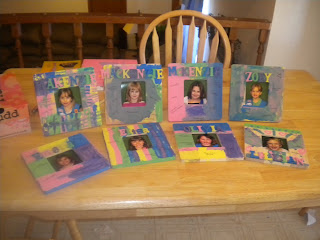 What a crazy few days it has been in the Stanley household!
First of all, I spent all morning finishing up my Daisy Girl Scouts "self-esteem picture frames" from our last meeting two weeks ago. I know, nothing like waiting until the last minute. That's how I roll. My Daisy scouts are currently working on their Respect Myself and Others petal. We spent a lot of time talking about self-esteem and how it's okay to say nice things about yourself. So at our last meeting I had the girls paint some picture frames and tell me some things that they like about themselves. I took those nice things that they said and hand wrote them around the picture frames. I took their pictures and put them into the frames. I had gone to Michael's and found these little wooden letters that I thought would be a GREAT addition to the girls frames. So I spent ALL morning long, hand painting 53 tiny wooden letters (to spell each girls name) and then hot gluing them to the frames. The frames look adorable, I just wish that the girls names weren't so long.... I have 3 different Makenzie's in my troop... and they all spell their names differently. They deserve it though. I love my Daisy scouts!

Last Sunday the bishop asked to meet me with and Jon on Tuesday night. When we showed up, he was not able to make the appointment but we met with one of his counselors. He asked me if I would be willing to speak in church on Sunday. Normally I would be okay with speaking in church, but this particular Sunday was Ward Conference.... and the topic that I was given to speak on is one that's pretty embarrassing for me. Jon and I had struggled with our activity in the church since we have been married and recently became more active in our ward. So I was asked to speak on Reactivation. It was really humbling to me to not only share my own reactivation experience but also talk about why it's important to be diligent in our visiting teaching and home teaching. I shared a lot from my heart and cried like a baby through most of my talk. After church I had a lot of people come up to me and tell me that they had enjoyed my talk but I had two members whose comments really gave me a lot of hope for my family. One sister told me that she had been inactive for a very long time and that she didn't feel like she had the strength or even desire to come back to the church, and now she serves in the Stake Relief Society. Another brother told me that he was inactive for over 40 years and that coming back to church was the best thing that ever happened to him. These two stories gave me so much hope. My dad has struggled with his testimony since I was young. And while he was going to try to make it to church on Sunday to see me speak, he got really sick and wasn't able to make it. I got really discouraged before I was supposed to speak because I had prayed so hard that he would make it. But now I have faith that someday, he'll be back. And I really feel like Jon and I will set an example for the rest of my family members who have not been active themselves.

Another exciting part of Ward conference was that Jon and I were given callings. Jon has been called to be a Sunday school teacher for the 16-17 year olds. He is sooo excited! I know that it will be a challenge, only two active kids in that class, but Jon will be great at it. I was called to be a Relief Society Teacher. I'm pretty excited myself! I get to teach on the 4th Sunday, which means I get to teach on topics out of the Ensign rather than out of the Gospel Principals manual (nothing against the manual, I just think the topics are a little dry sometimes.)

Even more exciting that me speaking in church and our new callings is..... Jon has been found worthy to receive the Melchizedek Priesthood!!!!! I am sooo proud of him! He will be ordained at Stake Conference which is April 11th. His brother will be coming down from Roosevelt to ordain him as well as some of his really good friends. One step closer to becoming an Eternal family! The bishop told Jonathan "I don't think you realize how close you guys are." WOW!!! SOOOOO EXCITING!!!

Not to take away from the seriousness of the above topics... but Sunday was also one of the most humiliating experiences of my entire life. Almost as humiliating as running down North Avenue dressed as a giant slice of pizza to avoid being tackled by a pack of teenage boys (I'll share this story some other time.) So my mom came to see me speak in Ward conference on Sunday and stayed with me through Sunday school and Relief Society. Sunday school ran a little over so by the time we made it into Relief Society the only open seats that would accommodate Tanner's car seat were right up front. Seated directly behind me was the Stake President and his wife. I made it through most of Relief Society with Tanner sleeping peacefully. All of a sudden Tanner began to get fussy... and not his normal fussy... angry and loud fussy. So I grabbed him and the diaper bag and ran out to make a quick bottle. I fed Tanner the first half of his bottle in the hallway and then tried to get him to burp. I patted his back for about 5 minutes and no burps. I figured he was good and so I walked back into Relief Society and took my seat. I put Tanner across my lap and let him continue to eat from his bottle. This was all good for about a minute and a half and all of a sudden... one massive burp... and an eruption of vomit. Seriously... the most puke I have ever seen come out of a child. Everybody got really quiet, the teacher even stopped mid-sentence with her mouth wide open, and all I could say was "I'm sooo sorry." I thought for a moment that he had managed to spew so far that he hit her. I think he managed to get a good two and a half feet in front of him. Luckily he hadn't managed to hit the teacher. I quickly grabbed Tanner and took off into the bathroom. His entire face, my entire front side, and the diaper bag were soaked in spit up. The Stake President's wife followed me into the bathroom to help me get cleaned up. I was completely humiliated but so grateful that she is such a nice lady. All I could do is laugh. And luckily it happened in Relief Society where almost every other mother had been in a similar situation.
Here's to hoping for a little less eventful week!
Posted by Kim at 11:17 AM